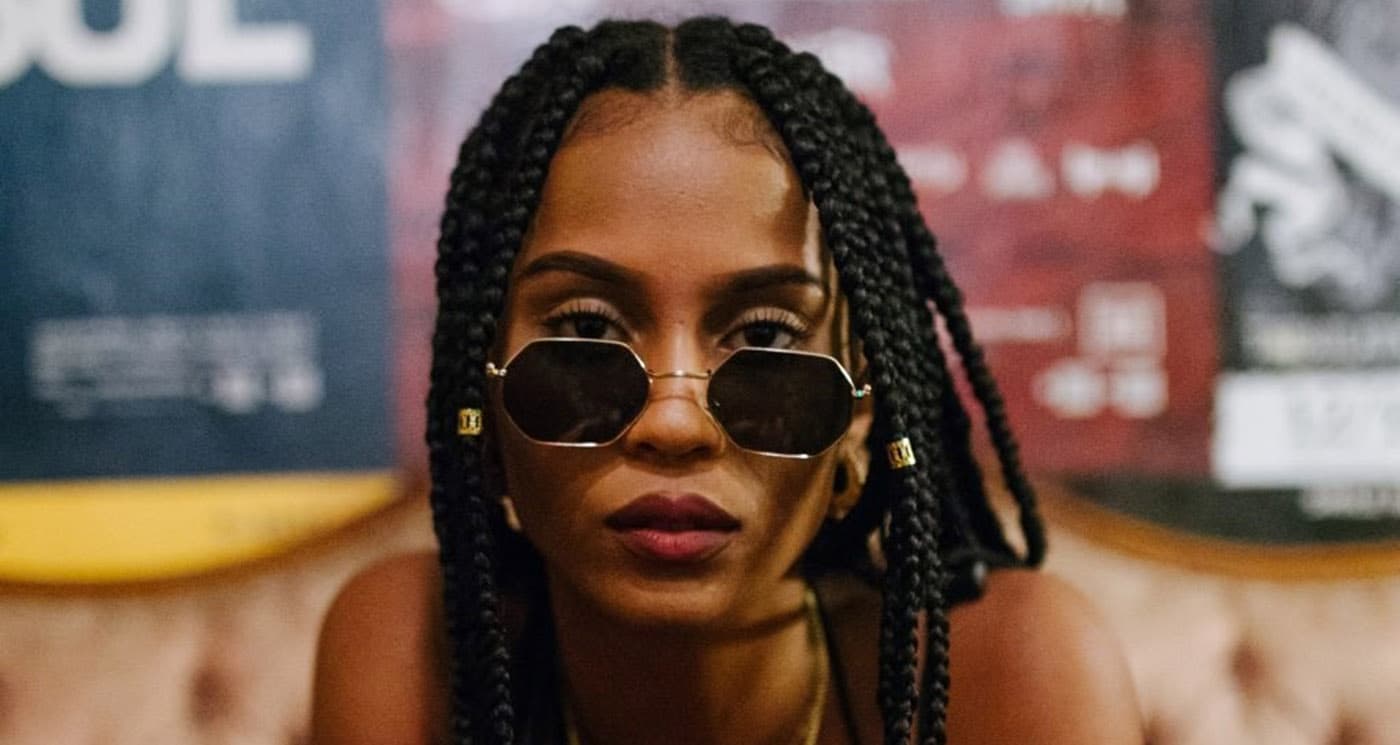 What would the world be without trend-setting female bosses? From Luna Loxx to IAMDDB, here are 10 badass womxn who are carving their own lane in the indie scene and setting the standard for truly unorthodox music.

Luna is a wanderer whose nonconformist style and taste for sonic adventures set her apart as an anomaly with an untameable spirit. A quintessential Scorpio by nature, Luna certainly understands the rules of the universe, but by no means does she play by them. Her unorthodox music is a testament to the nonlinear path she is setting. Luna’s mystery, which you can sense both through her music and her extrinsic appearance, draws listeners in and stimulates their curiosity. While the NOLA-native songstress is 100% independent, take one listen to Verdé and you’ll be thoroughly impressed by how flawlessly the project flows. Fierce, but gentle, Verdé is an otherworldly jaunt that carries Luna’s voice like an unstoppable wind cutting through blades of grass. Listen to Luna dive into a mystical journey like no other on Verdé, below.

Mickey Shiloh has truly mastered the art of not giving a damn. Her self-brooding style of narration sees her walk through the sometimes happy and sometimes painful memories of her earlier years, loathe her persistent vices, and reminisce about past lovers. With quick-witted chutzpah, Mickey makes it clear that she needs no external affirmation from anyone. Saying that she is blunt would be an understatement. Mickey doesn’t hold back from sharing the life lessons she learned and she certainly doesn’t try to glamorize her past. Listeners can find solace in her raw honesty and relevancy as a twenty-something-year-old who’s lived many lives. The versatile artist can sing, write, and freestyle circles around her peers. In 2017 alone, Mickey released 6 projects and dozens of more singles. Among them all, spirituality, purpose and self-love are strong, recurring themes. Mickey has truly shown what it takes to ride turbulent waves and come out on top. Whether it’s her raspy voice, ample use of auto-tune (which she pulls off quite well), the audacious statements she makes, or the fact that she’s in her own world when she’s in the booth, Mickey is a trailblazer who’s flame cannot be extinguished.

Listen to the somber “Try” by Mickey Shiloh below:

With the voice of an angel and a fascinatingly potent pen game, Lolo Zouai is definitely one to watch in 2018. The French-Algerian singer-songwriter doesn’t call her songs “bittersweet bangers” for no reason. Her songs are undeniable bops that hit listeners with the realities of life, both the good and the bad. Her sound has a flow as sweet as honey, but don’t be fooled, Lolo isn’t one to sugarcoat reality. Her songs touch on the struggles that most lips would shy away from singing and most souls would bury. Her music is hot, sultry and most importantly, real. On “High Highs to Low Lows”, Lolo pensively reflects on the troubles many twenty-somethings find themselves drowning in, from unpaid bills, to unsatisfying relationships and heartache. Singing in both French and English, Lolo Zouai allures listeners with such a raw and authentic artistry that you just can’t find in mainstream music. Listen to “High Highs to Low Lows” below.

Arima Ederra’s breezy vocals and poetic style of writing make her one of the waviest ladies in the game right now. You may remember seeing her vibing out in JMSN’s video for “Hypnotized” a couple years ago. Since then, she’s released Temporary Fixes, a 10-track, jazz-tinged masterpiece. Like a rose that has blossomed in the middle of wilderness, Arima’s delicate sound is perfectly contrasted with the thorns of edgy experimental instrumentation. “For the Restless”, a beautiful storm that awakens listeners’ emotions like a consuming flame, exemplifies this simile. As the pace of the live instruments in the background builds up, so does the tension and power in Arima’s voice, without once losing its graceful nature. Over enchanting beats that are sprinkled with conga drums, maracas, chimes, and starry-sounding synths, Arima creates a captivating aura for her listeners to dive into on Temporary Fixes. If you want good music to vibe to, look no further than Arima Ederra.

If you haven’t heard of the Moroccan-native singer yet, stop what you’re doing and skip straight to the song below (you’ll thank me later). With powerhouse vocals that reach impressive amplitudes, the versatile songstress excels in upbeat pop tunes, stripped-down acoustic ballads and grimy soul tracks. ABIR’s musical prowess is exemplified in her eclectic genre-blending and robust vocals. There’s a certain raw raspiness in her voice that testifies to an intrinsic passion you simply can’t find elsewhere. I’ve been following her musical career for quite some time now and may be a little biased, but I believe that ABIR is one of the best vocalists that this generation has to offer. 2018 will certainly be a promising year for this uber-talented singer.

Claire Mortifee’s music is a breath of new life that rejuvenates listeners’ spirits with a message of embracing one’s whole self. Her enchanting essence draws listeners in and encourages them with lyrics of self-love and enlightenment. Her vibrant sound is complemented by an array of electrifying synths and groovy rhythms. The singer’s debut album, Medicines, is a kaleidoscopic journey of healing that dips into elements of neo-soul, psychedelia and R&B. With mystic vocals that delicately dissolve into the album’s hypnotic beats, Claire rides upstream waves that splash neon colours with every pulse of the drums’ snares and pinch of the guitar’s elastic strings. Listen to the sensually-invigorating “Medicines” below.

There’s something very, very special about Ravyn Lenae. Her music extends far beyond the dimensions of mere sound and into a reverie of deep mental cognition. Her lyrics are intricately filled with metaphors and allusions, so it’s no wonder why her music leaves me feeling full every time. With poised articulation and authentic artfulness, Ravyn Lenae elegantly finesses over grimy fractured beats. Ravyn isn’t one to shy away from high notes, just take one listen to her latest song, Sticky, and you’ll certainly be impressed with the 19 year old classically-trained singer’s range. Breathy vocals and brilliant lyricism are distinct characteristics of Ravyn Lenae’s unique style. The singer has worked with the likes of Mick Jenkins, Stephen, Smino, and producer Monte Booker, and has a promising project with Steve Lacy that is set to drop in February 2018. Looking back at 2017, it isn’t hard to admit that Ravyn Lenae took the year by storm. Whether it was the release of “Midnight Moonlight”, a follow-up to her highly successful “Moonshoes” EP, or the fact that she opened up for both Noname and SZA on tour, Ravyn Lenae has hit the ground running and hasn’t stopped since.

The singer-songwriter from Toronto is one of the city’s brightest gems. Her debut EP, February 29, served as a charming and steamy welcome for those new to her sound. It is the perfect blend of vulnerability, sincerity and affection. Rich, sultry vocals that melt like butter are perfectly paired with polished production to make some of the smoothest R&B tracks I’ve heard from a current artist in a while. Her poised essence stands out and sets her apart as one to watch in 2018.

Ama Lou truly has a knack for taking the often hard to swallow pills of social injustice and making them a bit more palatable. The classically trained singer-songwriter from London has exemplified such maturity, optimism and prudence in her music that far surpasses that of peers her age and older. At just 19 years old, the multifaceted songstress tackles huge topics like racial tension and gender norms and playfully reconfigures society’s generalizations, breaking down any stigmas in her way. Watch the powerful video for “TBC” by Ama Lou below.

Hailing from Manchester, UK, IAMDDB has got the SAUCE. Over the past couple of years, she’s been building up not only a die-hard fan base, but a movement and way of life that she calls, “KEEPITG” (and she certainly does keep it G). She’s as transparent as it gets. To be blunt, she does whatever the hell she wants, however the hell she wants it, and she excels at it. Mixing raw trap with urban jazz, IAMDDB has demonstrated the ability to thrive in any kind of musical terrain. Her sultry voice peaks the interest of listeners, while her ability to switch between a range of genres keeps them craving more. She makes the kind of music you can bump in your car, vibe to when you’re chilling, or stunt on your haters with. Listen to the versatile IAMDBB’s “Hoodrich Vol. 3” below.