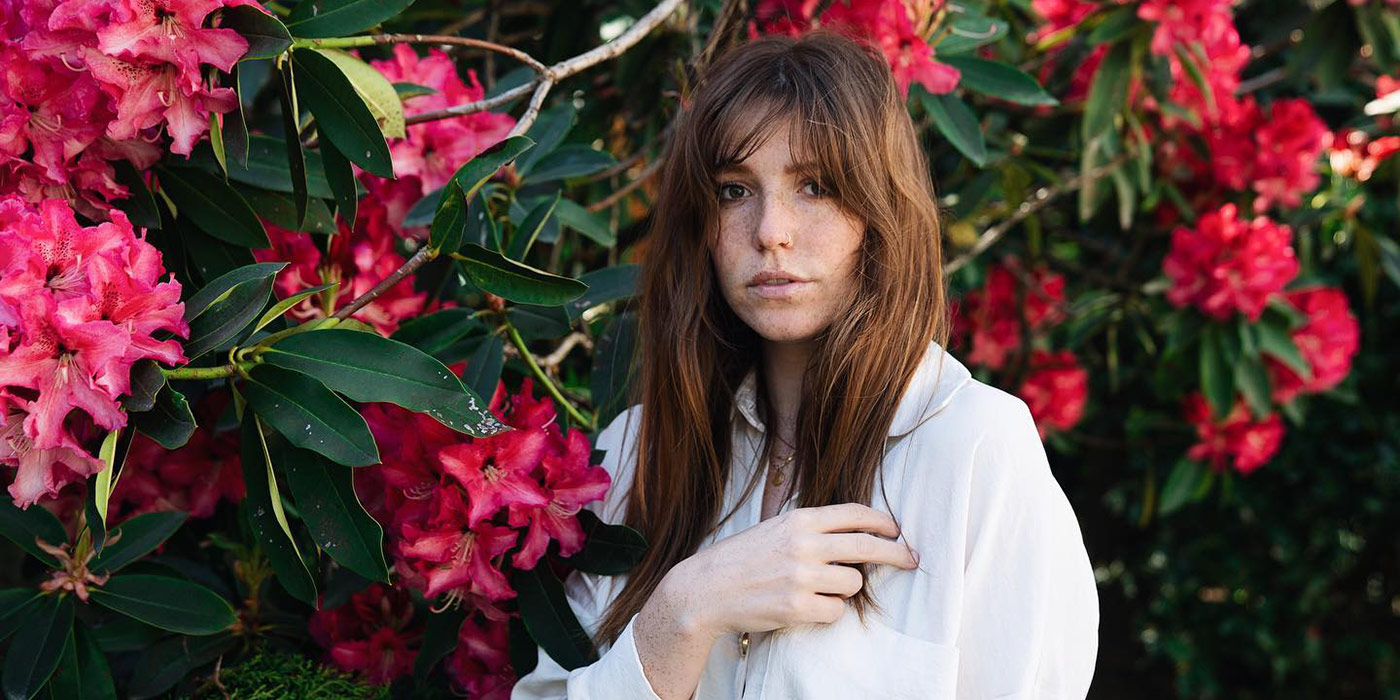 Coming out of Vancouver, Jillian Lake is set to follow up her “Honey” EP with her debut album. Working with producer Jordan Klassen, the two laboured over voice recordings, short clips, and more to flesh out a project with a cinematic and syncopated touch added to her stripped back folk and raw poetry. Today marks the release of the first single and accompanying video for Oliver.

Love and its loss that saturates sidewalks to street lights leaving you with a bitter gnaw in your belly is met with melancholic guitars and Lake’s sweet sorrowful vocals. This is the mixed feelings one feels in the aftermath. From fits of despair to dancing with your broken heart in a karaoke bar, which is exactly what she does in the Devon Mussett directed one shot video.

Read what Jillian Lake had to say about the visuals, her debut album, and more below.

I wrote “Oliver” after a particularly lonely Christmas when I was frustrated with myself for focusing on one person who didn’t want me while I was surrounded by so many people who did love me. I had just been given this beautiful red Gretsch Electromatic for Christmas and I sat with it in mum’s piano studio and tried to put music to the way I was feeling. I worked through the song as I surrendered to all the big feelings of being unworthy to the point where I didn’t even think I could write music anymore. One of the lines is “I can’t even write a song without you.” And I truly believed that at one point. So to come out with this being the first single to a whole record I wrote feels pretty good. Suck on that, Oliver.

For the video, I always knew I wanted to shoot in one long shot, and I knew I wanted it to be very me. I wanted to dress like me on any old day and I wanted to play with the contrast of mixed feelings coming out at different times – because what’s more beautifully devastating than a broken heart prancing around a bar?

This song, in particular, is quite literal, just describing things as they happen, until the bridge that gets a little more cryptic.

“Monotone overload, your sheets of gold are growing cold,
Dancing ’round with diamond rings, when I’m all in, that’s when you fold,
Huckleberry, where’d she go? you left her down in Tofino,
Your mum died and I didn’t know,
What’s really going on below?”

This all just describes the shift you see when someone falls out of love with you. Their voice that was once full of excitement and life is now short and unenthused by you. Their bed, now a lonely thought to you. Timing never matching up, as soon as you’re ready, they have moved on. Nicknames, special places that now seem solemn, and the person that used to be yours – their thoughts and feelings now all unfamiliar and unknown to you. 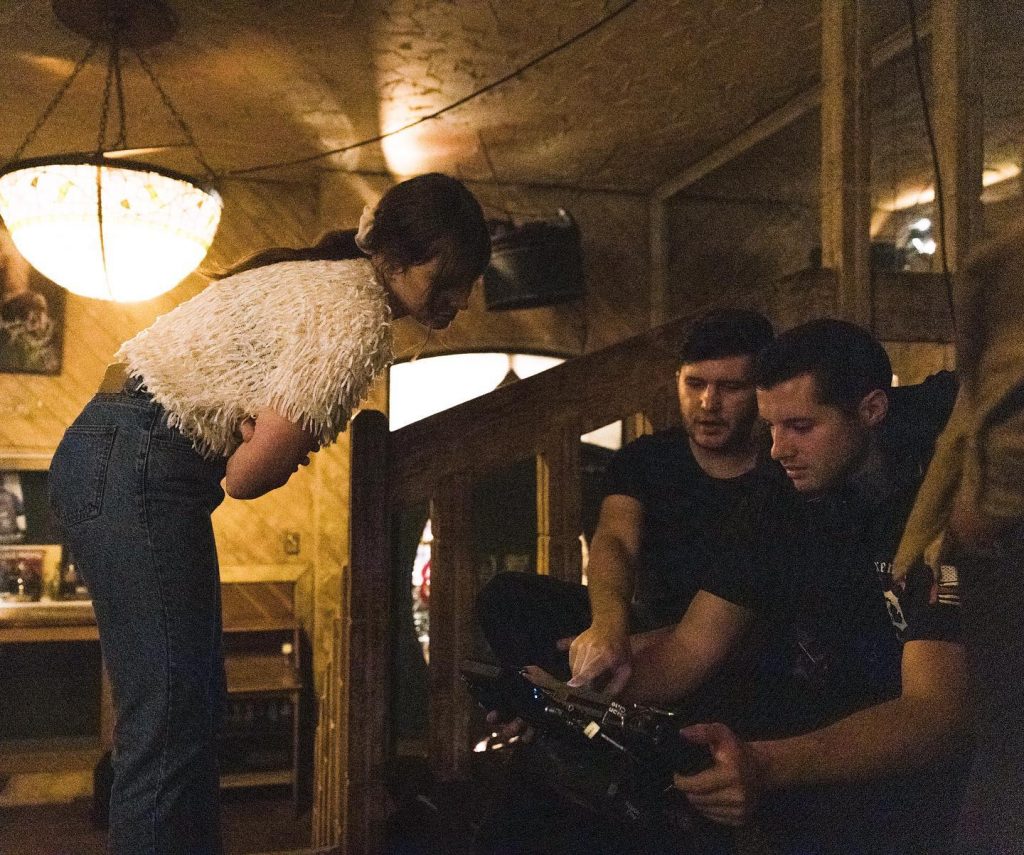 My director, Devon Mussett, and producer, Jason Hickey, found a dingy dive bar in Vancouver that ended up working perfectly. The walls were covered in years of the owner’s collectables, the floor was worn thin, the couches barely had seats. We got lucky with the background and decor contributing to the perfect atmosphere. The owner of the bar is a very kooky man, and very particular about his things. We were stuck on set for so long just rearranging the angle of his toy cars, adjusting the cowboy hat on his cardboard cutouts, pulling the ladder in and out of the crawl space as we tweaked things ever so slightly to his liking.

I was on cloud nine the entire shoot day of the video. I kept saying to everyone “I forgot real life adrenaline was a thing!” I also had to refrain from biting the crew in excitement. I love creating, and I love the process, but I do spend so much of my time being anxious and worried – so for shows and performances I am always so caught up being anxious that the part I truly enjoy is such a small window – when I’m on stage. Whereas making this video, I got over the nerves immediately and then just enjoyed the entire ten hours. My crew was amazing, I was in awe. I had never done something like this before and now I can’t wait to make more. Bringing it to life each take was my favourite, performing and really getting into it, and feeding off of everyone’s reactions and excitement.

We did the whole video in one long shot, which means our camera operator, Brock Newman, has a giant heavy rig attached to his body and follows me around take after take. Since the nature of the video was to be natural and spontaneous, that means every take I would do something a little different. Brock was so incredible at adapting to me, even when I would throw mic stands at him, slam doors on him, break out in dance, whatever. We ended the video outside in the alley and every take was different. We had a lady and a grocery cart make a cameo, sometimes cars and headlights shining at us, a yappy chihuahua. It was also raining out and so my main concern was my bangs… so every take I would end and then sprint back into the building as fast as I could, then fan Brock off, let him rest, towel off his forehead, then do it all again.

What can you tell us about your new album?

I went into the studio with Jordan Klassen last February with a mish mash of voice recordings. Some full songs, some just 30 second ideas, and he and I worked through them all to come out with a full album. Being in the studio is probably my favourite thing maybe ever. Working with Jordan was incredible as he can play every instrument and can bring any idea to life. I would spend my days in the studio for 8 hours and then go to work all night, wake up and do it again. I would be writing my lyrics on the bus to the studio in the mornings. This album is really important to me because it’s so many of my real experiences and stories. It’s all about growth and forgiving yourself and treating everything, even the pain, like it has a purpose in the instrumentation of your life. It is a huge release to me as I’m so critical of what I put out there, but as soon as it’s released and into the world, it’s less about me and more about what everyone else wants to make it about to themselves. I can look back at it, but use it as a stepping stone to move forward and just keep making better and better music.