Last year, we premiered Chloe’s World’s new video for “Forward In A Still Comfort” which was to be featured on their forthcoming album. That album has arrived, although you won’t be hearing them perform any of it live.

Sympathy For The Inanimate began partly as singer-songwriter/guitarist Ryan Brownrigg’s recording project/music diary while moving from city to city, and is combined with a slew of loose tunes from his previous project with Burke Cameron and Kyle Richardson. But when Brownrigg returned to Toronto, the trio was able to record the album with a small cast of friends.

This psychedelic journey weaves and twinkles with a kaleidoscopic jangle that flows with a constant surge. It mounts and sweeps, staring into a dreamy rock-induced realm that spreads and stretches like spun-glass with tongues of fire.

Ahead of Chloe’s World’s show with Robert Earl Thomas tonight at the Monarch Tavern, the band and I chatted about the albums history, the process, why they won’t be playing any of the songs live, and more. Read it all here and be sure to journey through Chloe’s World.

What made you decide to turn this recording diary into a proper album?

Ryan: The songs on this album were written several years ago and were intended to be used for our previous project. While we finished writing them and recording them I had a bunch of other material that I kind of couldn’t envision fitting with this stuff, but wanted to use for something anyways (the EP’s on our Bandcamp and several of the rough recordings in the ongoing song sketches). By the time we finished the album completely, it just seemed like the whole nature of the project, Chloe’s World, was going to be characterized by a lack of boundaries in where it might go. So it didn’t really matter that it doesn’t fully sound like everything else we’ve been doing given that it has a lot more instrumentation.

Did you ever think this minimal project would flip into this weaving psychedelic journey?

Ryan: I tend to think of music itself as being kind of psychedelic, which is why I use that as a descriptor for our music even though I don’t think it is in a typical sense. So even our less layered/less repetitious stuff I would still classify in the same way. I didn’t really have any direct path that I saw the project going, so that this album came to be wasn’t a surprise, but it is definitely interesting to see where our writing has gone since we finished the album and started playing some shows as a three-piece given how different it is.

With a 7-piece in mind, did you bring in other friends to help record the album, or was it solely the three of you?

Ryan: The album is entirely overdubbed, so we didn’t require any additional people to play on it even though there are a lot of tracks. However, all of the trumpet tracks were played by our friend Christopher Russo. And there is a faint whistle track at the end of “Waiting On Marta” that is our friend David Kleiser.

Even with a lack of boundaries in mind, what was the writing and recording process like?

The songs were all written in a pretty short period of time, and did have boundaries in that I knew I wanted the album to tie together the way it does. So writing a song would start by knowing the chords I wanted to start with and end with, but just letting what happened in between those points go where ever.

We recorded and mixed/mastered the album on our own (Burke has a background in audio engineering). The tracking was done in a number of locations. I was living on a farm in Caledon for a while and we recorded all of the drums in an old barn there. I tracked some of the guitar in the trailer I was living in on the farm, and a lot of them in multiple bedrooms. Funnily, the trumpet was all recorded in my car in a parking garage because I didn’t have a space other than that. In that sense the recording process really fits into having no boundaries – it was essentially wherever we could find some silence. 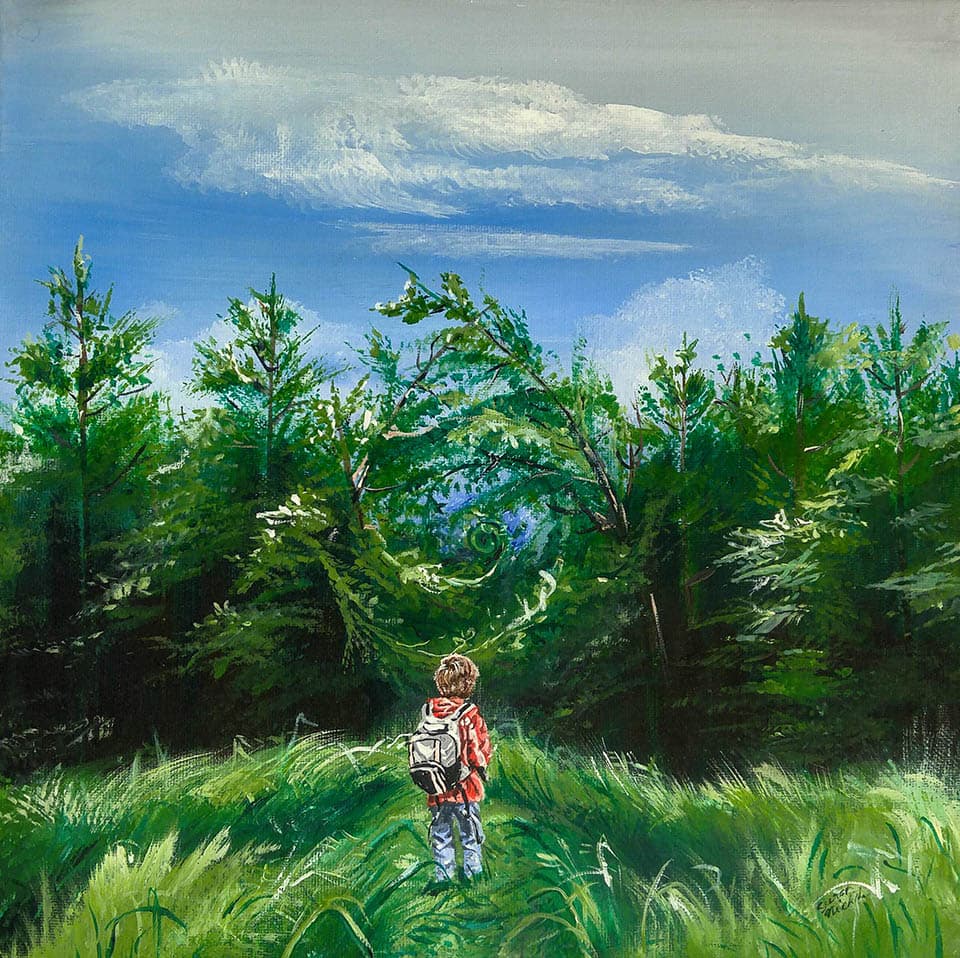 What’s the backstory for the album title?

Ryan: For a while, the album was going to be called ‘Life advice for a future self’ because I liked the idea of making a sort of sci-fi album that acted as a moral lesson for a post-life self (haha). However, “Sympathy For The Inanimate” came from the abstract feeling of being very attentive to inanimate objects and their place in everyday life. I thought of the name while I was loitering in the Atrium on Bay and for some reason felt bad for anything that lacked the capacity to move. There is a blatant philosophical theme in most of our lyrics, so having a title like that seemed suiting, even though it isn’t necessarily directly tied to any of the songs.

You’ve cited cultural cynicism, individual transparency/honesty, and metaphysical optimism as inspiration – how do these play roles in the writing and recording?

Ryan: Those themes were largely tied specifically to the song “Forward into a still comfort”, but are definitely far reaching into the whole album. I think the whole project is intended to be transparent and honest, which is largely why the ongoing song sketches is a public thing. Really, those recordings are just demo’s or one-off ideas /non-ideas that may or may not transform into something else. I also wanted to not treat this project like a business in the sense of having a stably recognizable sound/product, but rather to be open to constant change even if it gets confusing to us and anyone listening. This album was intended to flow like one big song – the last note of every song is the first note of the next, and the last note of the last song is the first note of the album. This kind of plays into the theme of understanding that the goal of most albums is to make something that is kind of stable and recognizable, but we let the actual songs go to weird places structurally to kind of combat that. Lyrically, most of our songs are either culturally cynical or metaphysically optimistic (or both).

I did feel after the first listen that everything flowed and even thought, prior to speaking with you, that it felt like one long song. I imagine playing this material live would alter that feeling unless you just played it start to finish.

Ryan: Yeah, I think that’s largely why it feels weird to play it live, also given that it was kind of put together with the intention of being heard fully versus as individual songs.

Just how kind is Kyle?

Ryan: Kyle is as kind as a kitten.

Burke: Kyle is one of the nicest people you’ll ever meet – he’s even brushed my teeth.

Kyle: Take the song in question as a testament, I’d say.

Now as a three-piece, does your new material sound similar or have you gone in a different direction?

Kyle: We’ve definitely stripped back this time around, putting more focus on how the set sounds live with just the three of us. These songs hit hard, but only need the three of us to really nail. I feel Ryan’s songwriting has transitioned flawlessly into this tiny ensemble, it’s always exciting getting new stuff from him!

Any plans to release your new material in the near future?

Ryan: We just tracked a 6 song EP at our friends’ recording studio – the Black Lodge – which we will hopefully have completed by August.

Do you have any more shows planned after Robert Earl Thomas?

Kyle: I am thrilled about the nationwide tour with Megadeth following the Robert Earl Thomas show.

Ryan: We don’t actually have anything booked, but will!

Fast forward to 2028 – it’s the 10-year anniversary of “Sympathy For The Inanimate”. Is Chloe’s World playing this back to front on the anniversary circuit?

Ryan: Haha, well we are honestly so tired of the whole album ourselves given that we’ve been sitting on it so long. I think we’d personally rather not hear it again, but hope others enjoy!