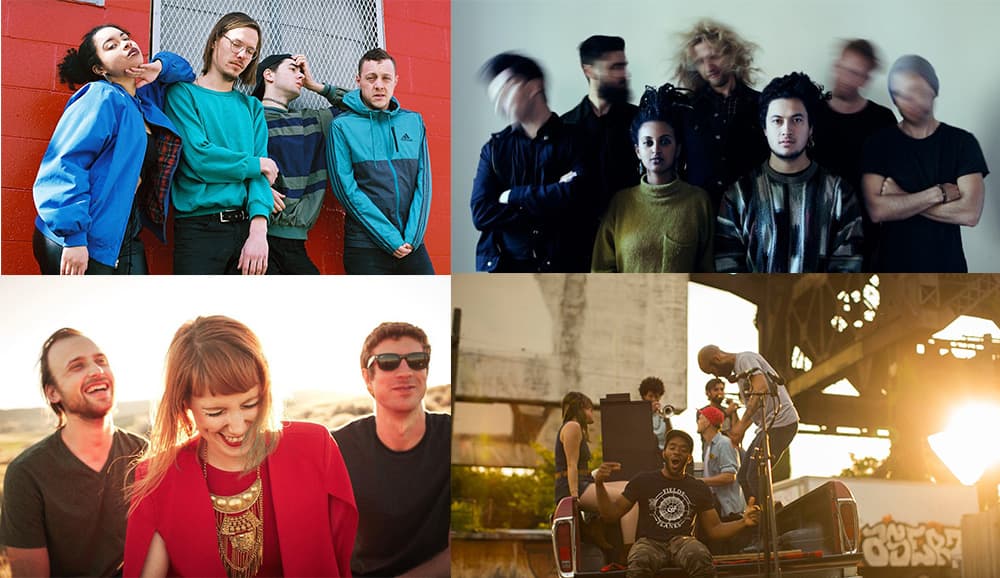 Whether it’s the dynamic live instrumentation, poetic lyricism, or daring genre-blending, no one does urban jazz quite like Indie bands. Here are four albums from four incredible Indie bands who have taken jazz to a whole new level in 2017.

It is utterly impossible to tie this album down to any one genre because the band has carved its own lane, if not its own entire freeway. “Liquid” is a glitchy, brave, and eccentric record that will have listeners coming back for more. There are hints of electronic, jazz and pop music, and certainly a strong rock influence, but the best way to explain the album is paranormal experimentation. Check out our full review of “Liquid” and you’ll know what I mean. The pioneering band is from Toronto, and they certainly do an exceptional job in exemplifying the calibre of innovation that comes from this city.

Hailing from Sydney, Australia, New Venusians is a 7-piece neo soul band that fuses poetic lyricism with gritty live instrumentation. The daring band blasts off on an extraterrestrial trek into the unknown on their self-titled debut album, “New Venusians”. Meklit Kibret and Christian Hemara deliver rich vocals that float curiously over spunky guitar riffs and sultry synths. The album illustrates the tug of war relationship between the utopian ideals of life with the unpleasant realities we often face as humans. Their steamy hit single, “Running”, first released in 2015, made its way onto the album, and it flawlessly showcases the band’s unquenchable appetite for sonic adventures. The album glides into “Get Along”, a slow winding tune about self-improvement:

“People can change, if time isn’t dragging us down. We can be better if we choose to float, not drown. Sounds so easy, but it isn’t easy at all. I still haven’t got it, I just wish it wasn’t so unattainable.”

Listen to the band ignite a cosmic flame on “New Venusians” below.

Moonchild’s third album, “Voyager”, is a spiritual nirvana that draws listeners in with its soulfully humble production and the ethereal vocals of lead singer Amber Navran. Much like the title suggests, “Voyager” walks listeners through a whimsical pilgrimage, whether it’s with the echoes of chimes blowing gracefully in the wind, or the soothing sounds of birds chirping. “Run Away” is a soul meets electronica track that dissolves into an arcade-like fantasy of reverberation towards the end. The song blossoms into “Think Back”, a slower-paced, but equally mesmerizing, rhapsody that invites listeners into Navran’s world as she reminisces about a fading love interest. “Voyage” reaches its final destination on “Let You Go”, a tranquil wonderland that washes over listeners like a soul-cleansing christening. It contrasts the gentle cooing of delicate flutes with grimy synths. Listen to the celestial “Voyager” below.

4. Sidewalk Chalk – An Orchid is Born

If you’re into experimental jazz and funk, prepare for your ears to be blessed by Sidewalk Chalk.  “An Orchid is Born” is the Chicago band’s 5th studio release and it is a sonic masterpiece. Fans of Hiatus Kaiyote will find comfort in the smooth vocals and live instrumentation on the album. “An Orchid is Born” is broken into 3 sections: The Hope, The Loss and The Birth. It’s one thing to dissect the auditory components of “An Orchid is Born”. It’s another to unravel the profound philosophical messages that Sidewalk Chalk explore, such as the deterioration of the earth, racism, mental health, police brutality, and the disparities between the rich and the poor.

The beautifully composed musical arrangements combined with the liveliness of modern Hip Hop make the group’s sound all the more unique. Sidewalk Chalk’s soulful vibes are deeply rooted in its hometown’s origins. With a hint of motown, the song “Sitcom” echoes the need for finding joy in lonely places. It is followed up with the song “Trapped”, a jazzy and poetic tune about feeling caught in the snare of complacency.

The album slows down on “Tell Me Now” to give listeners a moment to soak it all in, before erupting into “Dig”, a rock meets rap track that contrasts race with class. “An Orchid is Born” could not have been any more fitting for current political and social events. Not many are successful at integrating politics with music, but Sidewalk Chalk has ever so meticulously crafted a brutally honest, yet comforting album that powerfully speaks on the injustices that happen every day that tend to be ignored or forgotten.

Complete with trombones, trumpets, drums, keys, bass, and more, the band perfectly combines musicality with sincere lyricism on “An Orchid is Born”. You will jump for joy, cry, and basically be all in your feels, pinching yourself wondering if it’s possible for a single album to be THIS darn good. The 16-track album ends off with the soothing, stripped down track, “The Epilogue”, with the band’s vocalist, Maggie Vagle, singing a beautiful ballad over simple piano chords.

The album will leave you feeling utterly full. With no further ado, listen to “An Orchid is Born” below.